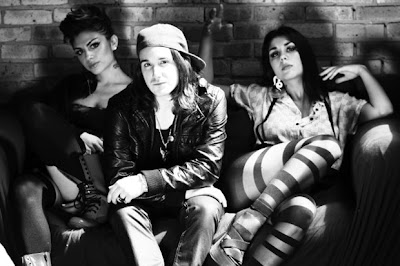 Damn this group is sexy.
Krewella consists of two sisters, Jahan & Yasmine, and a guy named Rain Man. Three DJs AND vocals. Their music is similar to Skrillex in style, as he is one of their influences, but they definitely have their own sound ringing out. Like Skrillex, these guys lead in with some melodic beats infused with some steamy vocals and then like a bass-wave crashing down on the crowd, the dirty filthy fills the air.

I've included their 4 tracks, along with the recently released music video for "Killin It". To get a free download of "Killin It", LIKE Krewella's Facebook Page.

It should definitely get your blood pumping in the right direction for a good night.

Posted by hi.good.music at 2/10/2012
Email ThisBlogThis!Share to TwitterShare to FacebookShare to Pinterest