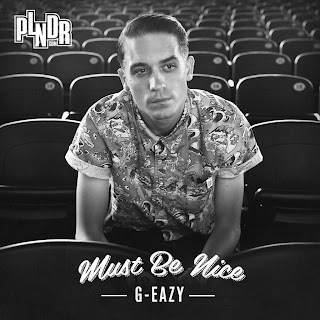 G-Eazy released his new album Must Be Nice today and it's already at #4 on the iTunes Hip-Hop/Rap charts....only beaten by Lupe Fiasco and Kanye West.....

I say it in all of my posts about G, but the man's headed to the top. He's alllways working on new music and knocking each new track out the park.  You may have already heard a couple of the tracks on this album as he's released a handful of the gems prior to the release of the album in its entirety, but there's plenty more in there to please. When you listen through the entire album, you can see just how talented this guy is and how hard he works to bring something fresh to the table.
Just like pretty much all of his music, G-Eazy produced, recorded, and mixed all of the tracks on this album. Pretty sick...

Anyway, Must Be Nice is up as a free download on his website ( http://www.g-eazy.com/ ) but if you'd like to support G-Eazy, you can find it on iTunes as well.  Yea...that's right, it's a free album, but the man still managed to take the #4 spot on the iTunes Hip-Hop charts.  Ridiculous!

Posted by hi.good.music at 9/26/2012
Email ThisBlogThis!Share to TwitterShare to FacebookShare to Pinterest