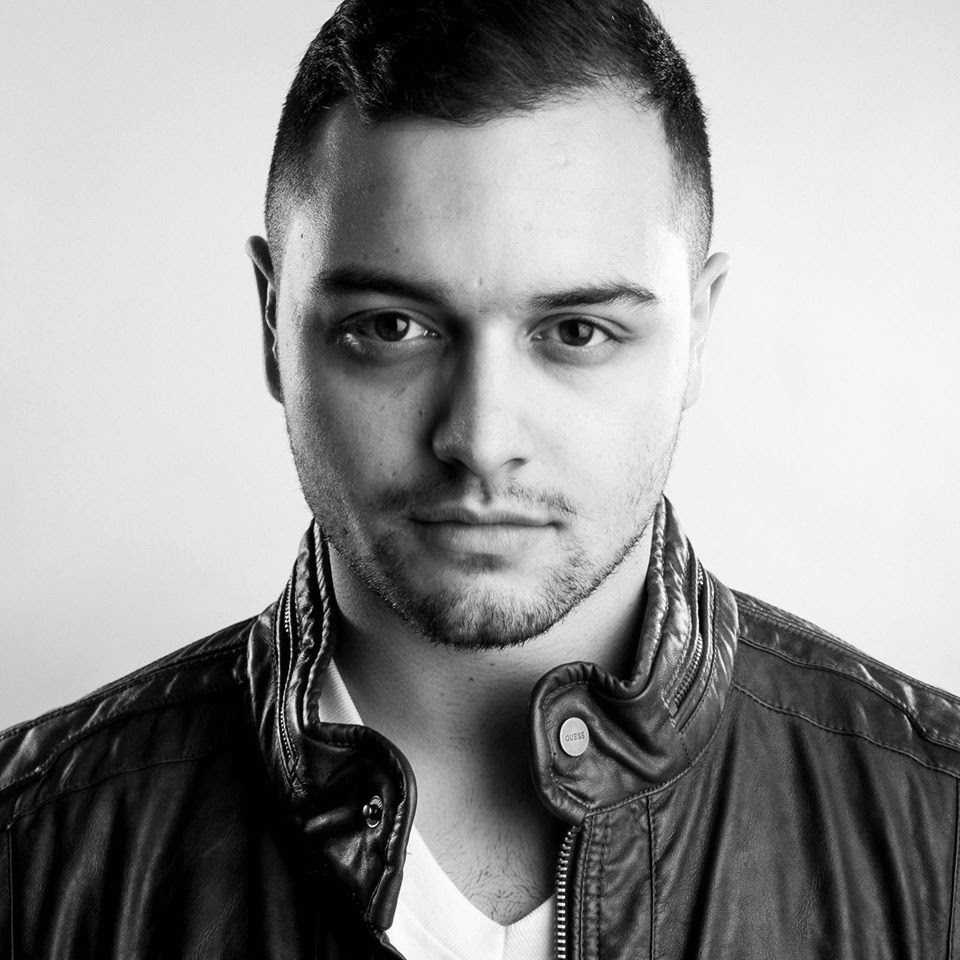 Mike Gazzo is throwing out new originals and remixes like they’re beads during Mardi Gras. With new material being released almost weekly, he’s quickly catching the eyes of new fans, as well as some big name artist requesting collaborations and official remixes. I met up with Mike while he was in town as the opening support for Kap Slap.

hi.good.music: How did your career start?
Gazzo: I started in bands when I was 14. I learned guitar, bass, drums; all that stuff while I was growing up and in a bunch of bands and playing concerts throughout, and then in college, I was in a fraternity at Towson University, TKE, and I just fell in love with dance music. Just started throwing ragers, and DJing. One thing turned to the next, I put some stuff on SoundCloud and it got picked up by blogs, and started getting bookings outside of Baltimore.

h.g.m: Your choices for remixes are across the spectrum. How do you go about choosing the next song to remix?
Gazzo: Some of it is inspiration from the original. I love this song. I want to remix it.  For instance, Snow Patrol. That was a song I always loved. I was looking for that acapella for two years. I found it but it was only in the right ear. So I had to mono it and do all this other shit to make it work.
There were others that were mostly impromptu. “Oh, I’m going to remix this.”
Most of the recent stuff has been asked. People have been asking me to remix them as official remixes, or if they weren’t really through the label, unofficial official remixes.

h.g.m: You give your music away for free. Some artists are arguing against giving music away for free saying it devalues the work. What’s your stance on the subject?
Gazzo: I think I’m going to put out free music until my record label tells me I can’t. (laugh) For me, I make so much music that it would be impossible to release it all through the label. And I like giving away free music, because that’s how I found my music when I was getting into certain scenes. When I first was getting into dance music, I wasn’t like, “Oh I’m gonna go to Beatport.” I didn’t even know what Beatport was at that point. I’d use Zippyshare & Mediafire. And then now SoundCloud has the free download. I was using that to find music. I think it’s important to not only grow your socials, but also give back to the fans. Even though it’s only like, $1.99, not everybody has a budget to spend on music. Some people can’t even buy bread, so then why are you going to be like, “No, you need to give me a dollar for my music!”, ya know?

h.g.m: “Never Touch The Ground ft. Y Luv” and “Follow Me” with The Disco Fries are huge tracks.  How did those collaborations come to be and what roles did each of you play?
Gazzo: Originally, I made a remix for them (Y Luv), “Never Touch The Ground”, and it hit the top of Hype Machine. It was my first Hype Machine track. They were a band that I got introduced to, not in person, but by a friend of mine who used to come visit all the time and he was like, “Yo, check out Y Luv!” I fell in love with the song. So I was like, I kind of want to remix this. So I remixed two of three of their songs, and “Never Touch The Ground” was the one that took off. It got a couple cool placements and one of the videos was “Live Unbound”. It was like, thank god I’m alive kind of thing. It was all really cool shots of people just living their life because that’s what the song’s about.
So slowly that fizzled a bit, and this past year, I was thinking I really love that song, but the production of the remix is not me. I’m now two years ahead of that. So I hit up the band, Y Luv, and I was like, “Hey, do you mind if I rework this. Do a couple things differently. Do a lot of the things the same because it worked really well.” They were like sure, just put a feature.  So I did that and got it on Proximity and a bunch of other blogs. It did really well and then it fizzled a bit.
Then the deal with Republic happened and during that time, through the fall, BPM picked it up. Through some algorithm, they found it and they started playing it. I was like, “What is going on. This song will not die! It will not give up.”
We had to fix our release schedule because we weren’t expecting it to get a placement on BPM and that’s huge. The band sent me over some of the instrumentals, but I kind of wanted to do something different. They had an original version. It’s kind of like, Kings of Leon, but we sort of agreed, the dance version was the better one. It was the one that was doing the best, so we made it an original. So yeah, that’s kind of the story of “Never Touch The Ground”. It’s going to be out on Casablanca/Republic probably in the next month and a half. So we’re going to release it for real.

Disco Fries are my friends too. Jersey guys. They’ve been around for a minute. They sent out a post, “Send us your demos for Liftoff.” I sent them some demos, and they were like, “Yo, What are you? What?!” They were freaking out, so that relationship started there and we’ve just been really good friends since. We’ve got a couple other records we’ve worked on together.  And that one specifically, they had a base of a song done. Core progression stuff. They wanted me to “Gazzofy” it. So I went in, did some production shit, and we got it mastered by their guys.

As far as work flow goes, it’s usually 50/50. Sometimes more of something is done by someone else. I did more of the synth work, whereas they did more of the writing. It sort of trades off in different areas. Each song is completely different, you know?

h.g.m: You’ve done a slew of remixes with other producers. Are you reaching out to them or are they hitting you up to do a collaboration?  And can you tell us a little about how the remixing process works when working with someone else?
Gazzo: The most recent one I’m doing is a collaboration with Two Friends. I’ve just been friends with them for a while, and had been under the same management at one point. We had a connection back in the day, and have stayed friends since then. Our sounds align really well, so we were just like, “Yeah, let’s do something.”, and we don’t do it. Eight months pass, and we’re like, “Let’s do something!” Then nine months pass. You know? Basically, they did acoustic guitar. They did processing on the vocals. They did core progressions. Some percussion. Sent it over to me. I worked on it for two days. Did my thing. Did parts of the drop. Send it back to them. Then we just did that a couple times.

Ones with Cash Cash, they’re friends of mine since high school, so a lot of those remixes, they were just like, “So you want to do this remix?”. So we did like 8, (laugh).

White Panda was actually a connection I got through Cash Cash. They came over to my studio and we just banged it out together. Sometimes, if you’re in the area, you just do it in person. If you can’t, a lot of it is Skype stuff. I did the one with Sweekuh. That was all Skype, and that was completely different than either of us had ever made. So that was interesting to do.

Sometimes you can use programs like Splice. It’s like a cloud based program for producers. You can upload a project and it will save every version along the way. Say Kap Slap sends me a project in Ableton, I open that and it opens in Ableton. Then I do all of the things I want to do and I save, and it will save in the cloud. So he can see what I did, you can post the versions, post notes on it. It’s incredible. It is definitely the future of collaborations.

h.g.m: Who is your favorite underground artist right now?
Gazzo: I’d have to say Lash, but also everyone under my management. Aylen, he’s incredible. We have a couple tracks together. Kastra is another one, and then Damien Anthony. Those are the three that are like, underground, coming up.

h.g.m: Who’s your dream collaboration?
Gazzo: Cold Play. Or maybe just change it up and do one with John Mayer. A complete wildcard.

h.g.m: What can we expect from you in 2015?  Do you have new tracks in the works?
Gazzo: Usually about five per week.
I have a song with Chase Rice called “Sun Turns Cold.” He’s a country singer. That’s the main one right now that we’ll be pushing.  I have a remix for Ariana Grande. A remix for Seven Lions. A remix for Dmitri Vegas and Like Mike. Those are the official ones I’m working on right now.
I have an original called “Love Drunk” where we’re working with a bunch of vocalists, but one in particular is Matt McAndrew, the runner up on The Voice last year. Incredible. He’s the man.
On top of that I’ve got one with Luciana called “Zombie”. I’ve got one with Vassy called “Treading Water”. Right now, I’ve probably got 10-12 originals that I’m waiting to put out, and I’m working on five or six more. Always. It’s just constant.

h.g.m: Is there anything else you’d like to tell your fans?
Gazzo: There’s just so many things happening right now. 2015 is the year. Like 100%, the year. Shit’s gonna pop off. It’s already starting to. I’m ready! Keep supporting and keep spreading the love!

Well, with that much in the works while also touring the country, Gazzo is certainly an inspiration to those looking to drop the lazy gene and get out there and do their thing, whatever that is. Thanks, Gazzo, for the music and the motivation.

good.hi.
Posted by hi.good.music at 2/11/2015
Email ThisBlogThis!Share to TwitterShare to FacebookShare to Pinterest