Kap Slap - Let It All Out (ft. Angelika Vee) + Interview 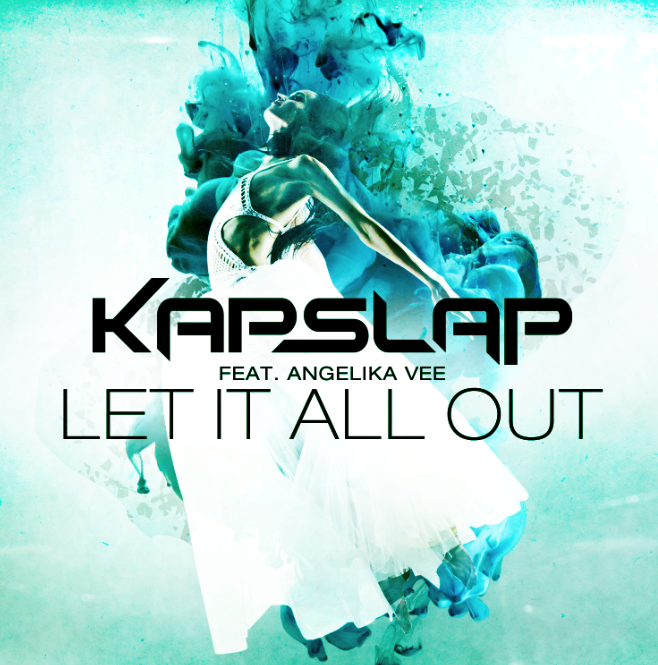 
Jared Lucas took his stage name, Kap Slap, from a drink concocted by his fraternity brother in college. The drink simply consists of funneling of beer and adding a shot of Bacardi 151 at the end. Though I cannot, and do not, advise drinking a Kap Slap, I highly recommend listening to one.
His career began with college parties, school concerts, and even a prom, but Kap Slap’s party popping mixes and bootlegs have grown so much in popularity in the past few years that he is now one of the top mashup artists on the scene. (I posted one of his biggest mashups back in September) Well, he’s now breaking his mashup boundaries and stepping into a whole new territory: originals.
“Let It All Out” (Ultra Records) features the silky vocals of Angelika Vee and marks Kap Slap’s debut as an original producer. If this first original progressive house track sheds any light on his future releases, he’s set for huge things in 2015.
Kap Slap performed at Hi-Ho Lounge last week and I had the pleasure of chatting with this gentleman about his craft, his new single, and what’s in store for the future.

hi.good.music: Who are your greatest influences for mashups?
Kap Slap: It wasn’t like one of those things like, “Oh, I aspire to be like this mashup guy.” I started doing it for fun. I liked it. I loved it. As far as artists are concerned, I’d like to have the qualities of different people. I’d like to have the versatility of Dillon Francis. The type of stuff he does, he’s all over the map. He can do anything basically. The musicality of Zedd. He’s like the modern day Mozart. He’s amazing. Then the production knowledge of someone like Knife Party, like Rob Swire. The sound and synth design they have is just absolutely unreal.

H.G.M: Have you ever collaborated with another mashup artist?
Kap Slap: Yeah, 3LAU and I did this thing a long time ago, “Turbulent Rock Anthem.” We took Turbulence and Party Rock Anthem, and re-pitched the whole song. Yeah, way back in the day when he was just coming up, we did that little mashup collaboration. It was fun. That was a good time.

H.G.M: If you could collaborate with anyone, whom would it be with?
Kap Slap: Dillon Francis. I think he’d just be a lot of fun to work with.

H.G.M: Are you currently collaborating with anyone?
Kap Slap: Oh yeah, I’ve got a couple collabs in the works. Gazzo and I are working on a couple little ditties.

H.G.M: Who’s your favorite underground artist right now?
Kap Slap: Lash & Kelvin Beat. They are these two dudes from Dominican Republic. I went down one time to play a show and found these guys. They’re really coming up right now. Lash is both of them, and Kelvin is just one of them. Lash has more of a progressive house sound to it, whereas Kelvin is more deep house vibe, the up-and-coming thing.

H.G.M: Most of your mashups include more than 2 songs. Is there a magic number of songs you aim to include in each track?
Kap Slap: There’re different types of goals. One song might have a really good instrumental, and you want to get as many good accapellas on that as possible. If you want one acapella to be your focus, then you throw a lot of instrumentals on top of that. There’re different spectrums and ways to go about it. There’s no magic formula.

H.G.M: What’s your personal favorite mashup you’ve made?
Kap Slap: Oh, that’s like saying, “Who’s your favorite kid?” I have a few that are favorites for different reasons. So like, the “ET Starry Eyed” was one that I was really happy about because I chopped up a bunch of stuff. I think there’s like ten different songs in there and people have no idea. Also one of my first ones, “Remember The Collapse”, I put “Remember the Name” by Fort Minor to “Til I Collapse” by Eminem. That’s just such a great work out song. I still work out to that these days. It’s the ultimate pump up track.

H.G.M: So, what exactly is the banana thing?
Kap Slap: (Laugh) It’s called “BananaCreepin.” It’s basically just taking a selfie of you eating an entire banana in, like, 10 seconds, with someone either not paying attention, or looking at you like, “What?” It’s absolutely hilarious. The reason that started was because I got this random SnapChat from a fan doing that and I just died laughing. I immediately got him to send it to my manager. So I asked the guy, “Dude, can I make this a thing?” He’s like, “ Yeah, man do it!”

H.G.M: You drift cars?
Kap Slap: Yep, there you go. That’s a classic. It doesn’t still happen. Man, I had this 1998 Buick Regal, with the hand brake on the floor. Front wheel drive; a boat. I learned how to drift and stuff via Gran Turismo. In my basement, my dad’s home office had this big screen, and I learned how to drive manual via that game. So I’m doing this drifting course on this Gran Turismo demo, and the physics transfer perfectly to real life.  I did a full 360. I almost dropped my transmission. It was retarded, but it was fun.

H.G.M: “Let It All Out” took over a year to produce because it was originally supposed to be for a remix. Can you explain the history of the song?
Kap Slap: I’ve used that track and another track that’s just sitting on my computer as kind of like my training wheels, if you will, for producing. Really learning the ins & outs of compression. I basically try all of my stuff out on those tracks. It’s one of those things, where it takes a long time to get up to that speed, but once you are at that speed, then it’s a lot easier to make stuff at that level. So you kind of have a general feeling of knowing what you’re doing on those kinds of things. That’s definitely been my baby for a long, long time. Finally ready. It’s a nice feeling to have something that you are completely, 100% proud of, and you just know exactly what’s going on with everything that happens in it. It’s really a great feeling.

H.G.M: When and how did Angelika Vee come into the picture?
Kap Slap: So we had this demo vocal on it, and it wasn’t really that great. I wasn’t a huge fan of it. It didn’t fit the song, and it was just like, “meh”. I heard Angelika Vee from the song “Don’t Hold Us” by Thomas Newson and she just has such a beautiful voice, I’m like “Holy Shit! I need her on this track.” The track itself, the key range is kind of similar to Bebe Rexha in Cash Cash’s “Take Me Home”. I heard her (Vee) cover of that, and was like, oh my God, she’s perfect for the song. It’s right in her range. Real house. So I just kind of blindly reached out to her, and the good thing is that now that I have a fan base with mashups, people kind of notice me more, so I have an easier chance, than say someone who’s just starting out and trying to get somebody’s attention like that.
I shot her over an earlier version of the track, and she was like, “I love this. This is great. Let’s do this.”

H.G.M: Did you actually get to work with her, or was this song created remotely?
I went out to L.A. and we had one session where we just worked on melody together. She sung a bunch of little things and said, “I like this. I like this” It took maybe a month or two after that for her to actually write the lyrics. She was really busy. Once she sent it over, I gave her a couple notes and she recorded the whole thing and sent it over online. It was a really, really cool process.

H.G.M: Will your other originals be mostly progressive house tracks too?
Kap Slap: The kind of direction I’m going right now, at least for the originals, is kind of a pop-edm fusion. Kind of like the stuff I’m putting out now, but, structure wise, more similar to say, “Heroes” or “Summer” in the sense of like, make three drops, and maybe make things a little shorter to make into a nice radio edit. That kind of thing. They’ll definitely be little prog housey, but with a more radio friendly vibe. At least that’s what I’m going for now. You know, I’m so new with actually finishing songs, I’ve got to work on that first, get that sound down, and then expand out.

H.G.M: Is a full original album in the near future?
Kap Slap: For now it’s going to be singles. Then maybe official remixes while moving forward. We’ve got a few singles lined up right now, so it’s just a matter of which ones we’re going to be using.

H.G.M: Anything else you’d like to tell your fans?
Kap Slap: Get ready for the ride. I’ve got a bunch of stuff coming up. It’s going to be nuts!

“Let It All Out” can now be found in the iTunes store. Definitely support this man and his huge new hit because he’s already been super kind in the past by offering plenty of mixes, mashups, and bootlegs as free downloads on his SoundCloud page.
Come back next week to check out my interview with Gazzo, Kap Slap’s friend and opening support on his ongoing Breakout Tour.

good.hi.
Posted by hi.good.music at 2/04/2015
Email ThisBlogThis!Share to TwitterShare to FacebookShare to Pinterest